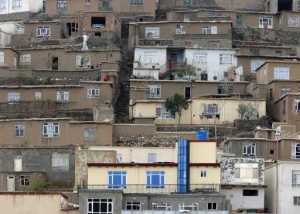 MORE STREETS OF KABUL. Today I saw a goat drive in downtown Kabul. Somebody drove approximately 30 goats to a vacant lot to let them graze on garbage. I didn’t see any vegetation just old Dr. Pepper boxes, cans (Afghans don’t like bottles. They like cans. Why? I don’t know.) and all kinds of other crap. When we drive from our office to the Ministry of Commerce, there is a big mountain in our way. In order to avoid traffic, our driver decided to drive the mountain today. All I can say was Holy Sh–! Not a speck of macadam, asphalt or concrete on the mountain. The mountain was paved with stray dogs, trash, dirt alleys and houses crammed together. (See below.) When we reached the bottom of the mountain, I felt as if I had sparred with someone and took way too many body shots. While driving, I try not to stare into other cars. Afghans are very private. We are specifically warned not to look into the yards of neighboring buildings from our villa’s roof deck. While we were stopped in traffic, I peered into the car next to us and saw three guys in an SUV sitting with semi-automatic rifles. The car wasn’t marked as a police, military or even a private security car. As soon as I saw the rifles, I whipped my head straight forward in case the penalty for rudeness was a shot across the bow. On the lighter side, I saw a ferris wheel on our ride today. It looked like it had never been used.

GURKHAS. Our upper level security guys are Gurkhas or Gorkhas. The Gurkhas from Nepal form a special regiment in the British military. Unfortunately, after their service in the UK armed forces, they often return to Nepal for a life of poverty and alcoholism. Joanna Lumley, the British actress in the original Absolutely Fabulous television series, made a big splash last year campaigning for Gurkha retirement benefits. Anyway, Gurkhas are prized in roles for ex-military personnel because they are highly trained and cheap relative to an American or a Brit. When we drive directly from the compound to the office, we have a driver. The driver is trained and armed. When we go to an external site, a Gurkha comes for protection. When we drove to the Ministry of Commerce today, a Gurkha came. Upon arrival at the Ministry, we were unloading some materials for one of my colleague’s presentation. The Gurkha insisted on carrying the projector inside. Realizing he could not enter the Ministry with his sidearm, he quickly passed his gun to the unsuspecting driver who fumbled it like Tiki Barber before Coach Coughlin made him change his grip on the football. The .45mm hit the ground about 6 feet from me and I was very pleased the safety was on.

One of my colleagues is headed home on Thursday, so he, our team leader and I decided to christen the pool table with the help of our friend Johnnie Walker. It was a nice evening. And after a week of no alcohol, even the Red tasted especially smooth.

This entry was posted in Thoughts from Kabul, Afghanistan and tagged Afghanistan, blogging, consulting, export promotion. Bookmark the permalink.